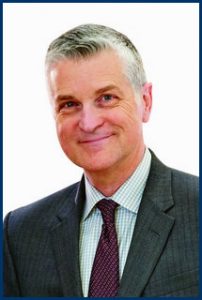 Fifteen years ago, at the suggestion of one of my faculty colleagues, I began a conversation with Mike Gousha, who had announced his intention to depart his daily broadcast television news duties at WTMJ, here in Milwaukee (“Channel 4,” if you prefer). Mike accepted our invitation to join Marquette University Law School as distinguished fellow in law and public policy. Thus was born what we came first to denominate our public policy initiative and now (since 2017) tend to refer to as our Lubar Center for Public Policy Research and Civic Education.

My occasion for noting all this—which omits for the moment everything in between—is that Mike has decided to shift to a new role at the Law School, as of the end of this new semester. In particular, he will step back from his daily obligations here and assume a sort of emeritus status. The word is especially appropriate: Although Marquette University now uses emeritus more broadly, its origin (well, its modern usage, anyway) is in academe, and Mike’s position here has been much in the nature of a faculty member. He has not taught students in law courses, but his initiative, creativity, and leadership have dramatically expanded the Law School’s role in civic education, as the creation of the Lubar Center dramatically attests.

Going forward, Mike will serve the Law School as senior advisor in law and public policy. It seems worth noting that the theory underlying Mike’s affiliation with the Law School will not change. In my initial correspondence with him years ago, I encouraged Mike to consider making Marquette Law School “the platform” for journalism and policy work that he might pursue. Since he joined us in January 2007, he has done this brilliantly—whether the particular form has been the “On the Issues with Mike Gousha” series; his crucial role in imagining the possibility, and persuading us as to the value, of the Marquette Law School Poll; introducing us to Alan Borsuk, senior fellow in law and public policy since 2009, and Charles Franklin, professor of law and public policy and director of the poll since 2012, among many other people; establishing the Law School as the go-to place for debates for important political office in this region; organizing conferences on K–12 education, national security, and Milwaukee’s regional water initiative, among many other topics; or, most recently, fashioning with John D. Johnson, our Lubar Center Research Fellow, an important series of articles in the Milwaukee Journal Sentinel as part of the Lubar Center’s Milwaukee Area Project.

That list is scarcely exhaustive, but my point, as noted, rather involves Mike Gousha’s work going forward. Like a faculty member assuming emeritus status, Mike is not likely to take up full-time work at the Law School and will surely partner with others than the Law School for aspects of his possible activities (e.g., work on a documentary such as this project last year with his wife, Lynn Sprangers, and others). But, as senior advisor in law and public policy, Mike will remain part of our Marquette University Law School community and engage in projects with us here as they appeal to him. Meanwhile, the work of the Lubar Center for Public Policy Research and Civic Education will continue on a daily basis. That can be the subject of separate communications or announcements as we plan and realize that future.

More immediately, please join me in extending good wishes to Mike in this next (Marquette Law School) chapter.