Walk Score is a company which generates eponymous scores for towns and addresses based on how many staples of everyday life you can walk to. A score of 0 means nothing is in walking distance. An entirely walkable community scores 100. New York City scores 88, Los Angeles 69, Houston 47, Scottsdale 32.

I grew up in Bardolph, Illinois with a walk score of 7. We lived within walking distance of three places where I could legally spend money–the post office and two pop machines. Bardolph wasn’t always this way. My great-aunts could recall catching the train to the county seat. During my mom’s childhood, the village still had a grocery store, pool hall, schools, and two churches. The high school consolidated the year after she graduated, and the grade school followed not long after. The Presbyterian church closed in the early 1990s, while the Methodist church lingered just a few years longer. Last time I visited, the pop machines were gone, and the post office was only staffed 2 hours a day.

Bardolph is a little closer to oblivion than some of its neighbors. But all of McDonough County’s small towns–Adair (walk score: 7), Good Hope (10), Industry (8), Prairie City (17)–are well along that same trajectory.

These low walk scores aren’t a consequence of car-centric design. You could walk to the furthest corners of each in 15 minutes, possibly even on a sidewalk. There is just almost nowhere left to walk to.

This being my experience of rural life, I was surprised to encounter many healthy small towns in Wisconsin, some of which are even thriving. Like the towns where I grew up, they predate the personal automobile. Unlike rural Illinois, they still have economic activity. Many of these small towns retain highly walkable downtown cores. In fact, a typical Wisconsin small town outside of a metropolitan area is much more walkable than a similarly-sized suburb.

I collected the walk scores for Wisconsin’s 600-odd incorporated cities and villages. Specifically, I retrieved the walk score for “downtown [CITY NAME].” Of course, not all residents will live in such a walkable neighborhood. Downtown Milwaukee’s walk score is an excellent 98, but my neighborhood’s score is 67. Some farther-flung parts of Milwaukee’s northwest and southwest sides are wholly car-dependent. This is not a measure of the experience of the typical resident in each place. By focusing on downtowns, I present each municipality at (or near) its best for walkers.

The figure below show’s each downtown’s walk score, with municipalities arranged by total population. Of course, walkability generally increases with population size, but there are some noteworthy exceptions. 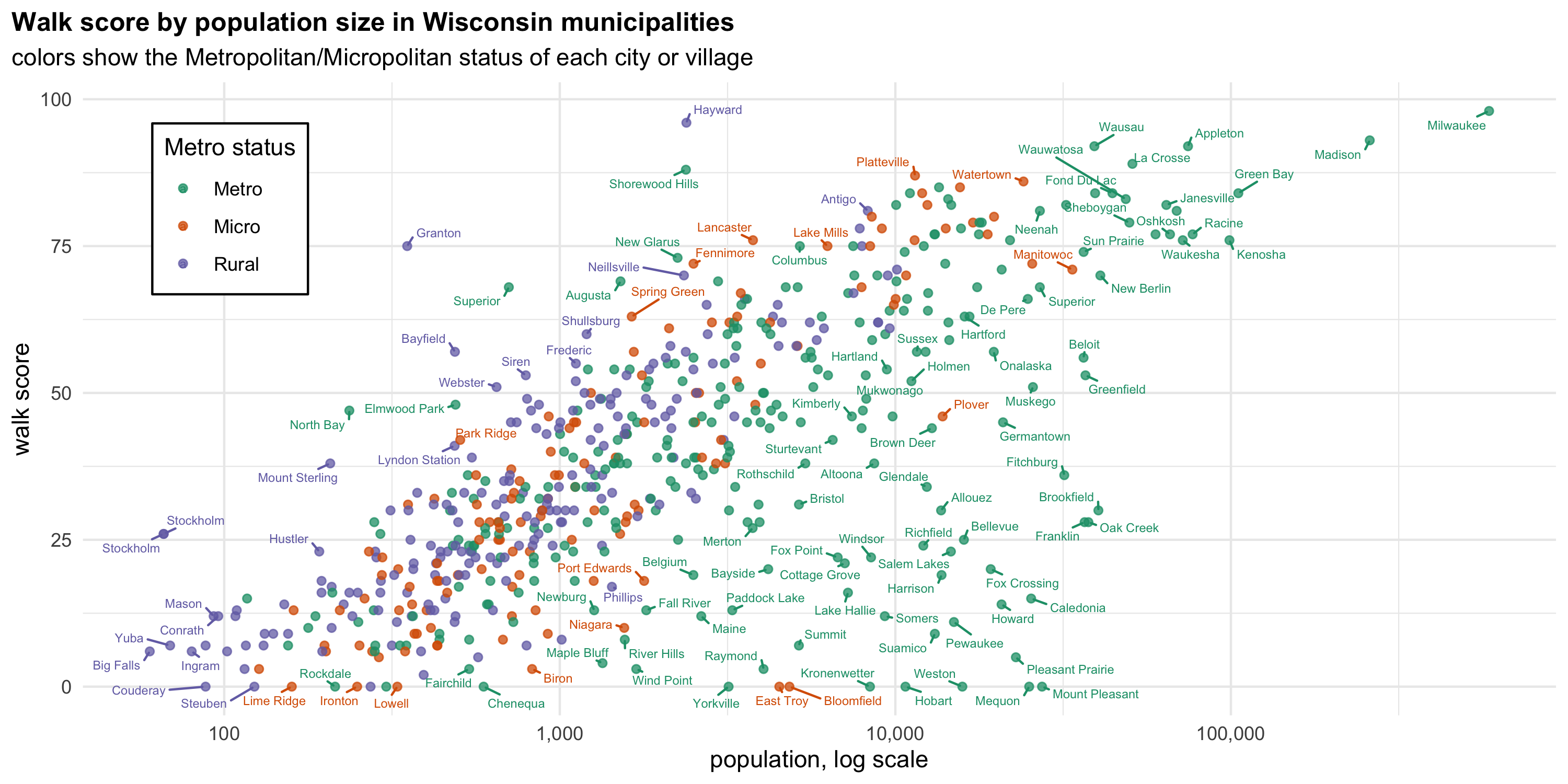 Many suburbs, despite their relatively large populations, have abysmal walk scores. Some more rural towns have exceptional walk scores. Consider Hayward, the county seat of Sawyer County, in northwestern Wisconsin. Hayward City proper has a population of 2,384. Downtown Hayward’s walk score is a whopping 96–good enough to rank second in all of Wisconsin. To be fair, Madison is probably a better city for pedestrian’s overall, but Hayward’s high score isn’t just based on a bunch of cafes for tourists.

The circle on the map below has a 1 mile diameter. Within that circle, there is a large grocery store, a pharmacy, elementary and middle schools, a senior resource center, a therapist, two auto part stores, two hardware stores, three thrift stores, a laundromat, a barber, several churches, parks, and multiple bars and restaurants.

Hayward is exceptional, but the downtowns of half a dozen other rural communities–Antigo, Rhinelander, Ashland, Granton, Sparta, Neillsville and Tomah–are all rated “very walkable.” Take a tour on Google maps, and you’ll see why.

Nineteen downtowns in micropolitan areas are very walkable. Among them are Platteville (87), Watertown (86), and Menomonie (85). Recall that the average score for New York City is 88.

Focusing specifically on towns with populations between 2,000 and 15,000 shows big differences between suburbs and more rural population centers. Among such municipalities in metropolitan areas, the average downtown walk score is 48. In micropolitan areas and rural areas alike, it is 59. Even this overstates the walkability of suburbs. High scoring communities like Portage, Mount Horeb, and New Glarus are technically within a metropolitan area, but they are more similar to rural towns in both history and design. 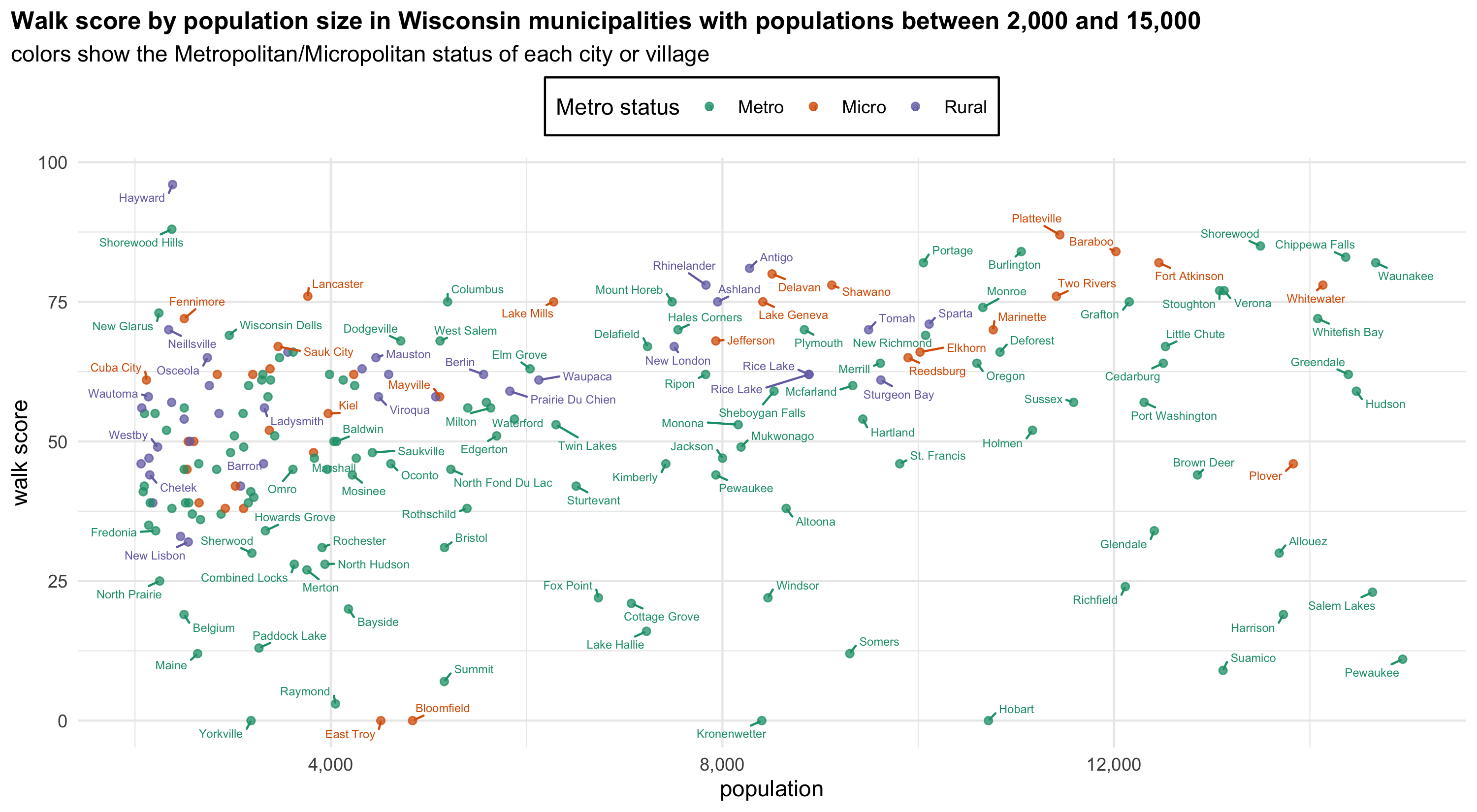 Small towns in rural and micropolitan areas benefit from two things that suburbs lack. Unlike many suburbs, they were built before the personal automobile, so their downtown cores and surrounding neighborhoods, at least, were designed to accommodate pedestrians. Secondly, they are regional hubs, not bedroom communities. The City of Hayward may have fewer than 2,400 residents, but it is by far the largest population center for many miles.

I don’t mean to suggest that one can comfortably live without a car in any of these small towns. No small town will contain everything one needs or desires, and intercity transit doesn’t exist in most of these places. Development in small towns often takes the form of new construction on the outskirts. Still, one’s daily routine can be less car-dependent in many rural communities than in the suburbs. In contrast to Illinois, tourism, outdoor recreation, and more specialized forms of agriculture have kept Wisconsin’s rural economy from totally collapsing. At least to some degree, the downtown cores of these small towns still preserve a style of design built for pedestrians. Maybe the transition of more professionals to working from home will breathe new life into them.

Change, like beauty, appears to be in the eye of the beholder.

After the Wisconsin Supreme Court ruled that new legislative an

d congressional district maps must change as little as legally possible from the current maps, observers saw it as a win for the Republicans and conservatives who sought that ruling. Democrats have condemned the maps drawn in 2011 as an extreme partisan gerrymander that has locked in GOP control of the Legislature for the past decade.

But while least-change maps are sure to be Republican-majority maps, they’re not necessarily going to be the same maps that the GOP-controlled Legislature approved last year, only to be vetoed by Democratic Gov. Tony Evers. And the ruling hasn’t driven all the rival map-changers out of the courtroom.

Instead, Justice Rebecca Bradley’s majority opinion has prompted a legal debate over exactly what “least change” means—and a contest in which nearly all of the parties are competing to convince the court that their preferred maps would change less than those submitted by their opponents. END_OF_DOCUMENT_TOKEN_TO_BE_REPLACED

In Wisconsin, public and media attention has focused largely on how much red and blue show up in each proposed legislative or congressional map, reflecting the partisan balance of power between Republicans and Democrats.

But redistricting is also a portrait in black, brown, and white, with district lines under scrutiny for how they affect the rights of Black and Hispanic voters to choose their preferred representatives. And as state and local redistricting debates show, federal court decisions have left a lot of gray areas in interpreting those legal rights. END_OF_DOCUMENT_TOKEN_TO_BE_REPLACED

The rules of the game are set. Now the scoring begins.

In a 4-3 decision, the Wisconsin Supreme Court recently laid down two key guidelines that are already having a major impact on the outcome of the contest over redrawing the state’s legislative and congressional maps.

The high court’s Nov. 30 opinion dealt a one-two punch to gerrymandering opponents. In drawing new district lines, justices said they would not consider what impact those lines would have on the balance of power between the two major political parties. They also said they would make as few changes as possible to the current maps — maps that have given Republicans an almost-unbreakable hold on the state Legislature for the past decade. END_OF_DOCUMENT_TOKEN_TO_BE_REPLACED


The Federal Centers for Disease Control (CDC) and the Wisconsin Department of Health Services (DHS) both independently collect COVID-19 vaccination statistics. Their statistics for the state of Wisconsin vary. Statewide, the CDC counts 3,469,836 fully vaccinated individuals (as of 2021-12-01), while the DHS counts 3,268,304 (as of 2021-12-02). This gap of 201,532 is too large to be explained by small differences in the reporting period.

Proportionally, the differences are even larger at the county level. For instance, according to the CDC, 76% of Bayfield County residents are vaccinated, but the DHS places this figure at 66.4%. The opposite pattern is shown in neighboring Douglas County, where the CDC vaccination rate is 39.9%, and the DHS rate is 58.9%.

The DHS acknowledges differences between their data and the CDC, saying “Data on this page may differ from data reported on the CDC COVID Data Tracker due to the fact that data may be updated on different schedules and reflect data ‘as of’ different dates or times of day. There may also be a delay between the time a vaccination record appears in the the state system and when it is received by CDC.”1 Likewise, the CDC website states, “Data presented here use standard metrics across all United States counties. However, data on this page may differ from data on state and local websites. This can be due to differences in how data were reported or how the metrics are calculated. For the most accurate and up-to-date data for a specific county or state, visit the relevant state or lcal health department website.”2 However, simply deferring to the DHS isn’t the best option in Wisconsin, because the CDC receives reports from some agencies which don’t share records with the state government.

There isn’t consensus about which set of numbers is best to use. The Milwaukee Journal Sentinel uses the DHS statistics in their vaccine tracker, while the New York Times uses the CDC numbers. As I dug into the details of each dataset is tabulated, I discovered that each has strengths and limitations. The two datasets need to be combined to create the most accurate picture of vaccinations at the county level in Wisconsin.

The map and table below show the differences between county-level CDC and DHS estimates downloaded on 2021-12-02.

I believe there are at least two reasons for this set of discrepancies. The CDC counts more vaccinations overall because they receive vaccination reports from more agencies than the DHS. However, the DHS does a better job of matching vaccine recipients to their home county. Each of these sources of error affect particular counties differently.