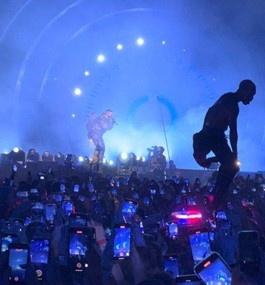 No, this picture is not a still from an episode of “Black Mirror;” it is a photograph from the Jacques Berman Webster II (also known as Travis Scott) concert on November 5, 2021, in Houston. The fans (including the man standing on the ambulance) are unaware that their exuberant pushing and shoving are creating a crowd crush. In other words, the venue has become so densely populated that the crowd begins to function like a liquid. Therefore, pushing from the back has a ripple effect that causes fans near the front (1) to experience compressional asphyxia due to the pressure on the lungs or (2) to fall and be trampled.

Unfortunately, this tragedy resulted in the death of eight people and physically injury to over 300. The number of victims may continue to grow as people are treated for the mental trauma they experienced.

This is certainly not the first time these “crowd crush” events have occurred, and this is not the first time that Mr. Webster has been involved in fueling these sorts of situations. Mr. Webster was arrested for disorderly conduct in 2015 at Lollapalooza in Chicago and again in 2017 at a concert in Arkansas. At both performances, Mr. Webster created hysteria by getting the crowd to “rage,” which resulted in injury and chaos. What is alarming is that Mr. Webster did not immediately stop the show in Houston (the victims can be heard on audio screaming for help). Furthermore, the venue seemed woefully unprepared to handle the event, despite Mr. Webster’s well-known reputation, the promotor’s history of these risks, and the advancements in crowd control. Additionally, the Houston police chief allegedly visited the performer ahead of his show to “convey[] concerns about the energy in the crowd.”

It is no surprise that over 14 civil lawsuits have already been filed against the promoter, Live Nation Entertainment Inc., 10 of which also named Mr. Webster. The lawsuits allege “that Live Nation acted negligently by failing to create and enforce proper safety protocols, failing to provide adequate security and failing to maintain proper crowd control.”

Live Nation will most likely point to their 56-page operation plan submitted to Harris County ahead of the festival as one possible defense. That plan covered security and medical response protocols, including “the potential for multiple alcohol/drug-related incidents, possible evacuation needs, and the ever-present threat of a mass casualty situation.” However, despite the plan’s existence, it is clear that either it was not sufficient for this situation or the Live Nation staff did not appropriately follow it.

The event is still under police investigation, so we will not have all of the information until later. Until then, I hope that other promotors and performers learn from this and take better care of their consumers.

Do you think either the promotor or Mr. Webster could be held criminally responsible for this event?