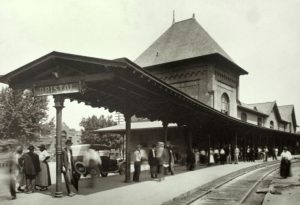 My grandfather recently passed away. It wasn’t Covid; not directly at least. A lifetime of kidney problems and other assorted ailments weren’t helped by the pandemic-induced lock-down. Rather than go out to eat or graze at the local grocery store buffet, as he normally would, he dined on pre-cooked meals and unsurprisingly his health suffered for it. So no, Covid didn’t kill him, but it certainly helped. In legal-speak it was more of a proximate cause.

In any law school tort class, students learn about proximate cause as it relates to negligence. One case, which is widely cited, is Palsgraf v. Long Island Railroad. In this slice of history, a remarkable and tragic chain of events took place. The plaintiff, Mrs. Palsgraf, waited for her train, at the railroad’s train station. As she waited, an employee of the train company unknowingly helped two men load explosives onto a different train. The explosives detonated, and had one of the two men been injured by that explosion this case would almost assuredly be lost to the sands of time, a simple case of negligence with a simple resolution. Instead, in the hubbub that ensued, a large scale Mrs. Palsgraf was standing near struck and injured her. The exact manner in which the scale injured her isn’t mentioned in the opinion itself.

Every law student learns about this case and its meaning. The legal rules and principles of law that the majority and dissenting opinions announced are followed to this day. But the decision doesn’t spill any ink about Mrs. Palsgraf. A terse statement of facts accompanies the majority opinion, in which Mrs. Palsgraf isn’t even mentioned by name. She is simply “Plaintiff.” Thus, she is reduced to something less than human. I thought of this case as my grandfather lay in hospice, near the end of his life.

I thought to myself if Covid was the subject of a suit, how would the decision describe my grandfather? If the case announced a rule of law, how would future lawyers describe it? I imagined the decision focusing solely on his pre-existing kidney and heart issues. Or maybe the judge writing the opinion would list off his professional accomplishments with the fervor of writing a grocery list. The problem with either approach is that is reduces a human being, with a lifetime of experiences and impact and reduces to a terse statement of facts.

My grandfather, like any human being, cannot be adequately described by a single word. He was more than simply his health record or his professional accomplishments. He was someone who wanted to learn everything, and I mean everything, about every person he met. Going to the grocery store would be an hour-long ordeal because he was compelled to talk to everyone he recognized. And he recognized everyone. He was inquisitive, not because he was nosy, but because he genuinely cared about the lives of others. He practiced kindness to all, and with a level of sincerity that was instantly endearing. You could talk to him for a moment and walk away secure in the knowledge that he was instantly invested in your success.

But if his life were reduced to a legal opinion or entangled in litigation, none of that would be apparent. One would have to search out other sources to glean the backstory. I think of my time volunteering at the Milwaukee Justice Center, where clients come when they need help with civil legal forms. Here, the clients come in and give beautiful backstories as to why they need a motion in their case. The stories are intricate and stretch years. The cast of characters is always immense. These are always emotional, human-driven stories. And, heartbreakingly, it usually doesn’t matter. I try to explain to clients, that when you get in front of a judge or court commissioner you must tell a legal story, not a human one. The judge has limited time and must apply a certain legal standard to the facts you present. Brevity is key. Reducing years of conflict to a terse statement is paramount.

As this pandemic rages with no end in sight and courts move to Zoom and telephone hearings, I worry that the legal process will become even more impersonal. I don’t have any experience with a Zoom court hearing, but I know that the screen, despite its state-of-the-art camera and microphone, doesn’t convey the full essence of the person behind it. The camera reduces even the most vibrant person to a simplified caricature. I hope that once we are all on the other side of these turbulent times, we remember that everyone who encounters the legal system is a nuanced human being deserving of our time. While everyone is like Helen Palsgraf, hopefully no one suffers her fate. She wanted to take her children to the beach that fateful day and certainly didn’t want to be left with a permanent brain injury. Tragically, in law school textbooks, she will forever be simplified as “Plaintiff.”

The Supreme Court and the Fate of the Ministerial Exception