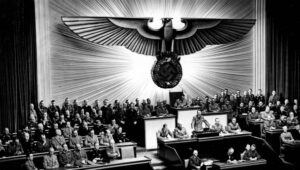 In recent years lots of people have been calling lots of other people fascists.

During the Trump Presidency, for example, former Secretary of Labor Robert Reich and others decided after careful reflection that Donald Trump qualified as a fascist.  Trump himself seemed not to notice, and if he did, he most likely dismissed the label as just another pejorative hurled by his enemies.

In contemporary Europe important political figures have been called fascists.  Prime Minister Viktor Orban of Hungary and President Recep Tayyip Ergodan of Turkey sometimes wear the label.  In France critics suggest right-wing leader Marine Le Pen is a fascist, but she complicated the labeling by expelling her father Jean-Marie Le Pen from their political party because he was a fascist.

Fascist-labeling, to coin a term, has been rampant during Russia’s invasion of Ukraine.  Vladimir Putin’s Russian government has long since ceased to be Communist, but in the opinion of some Putin is certainly a fascist.  For his part, Putin has stated that the Ukrainian government is dominated by fascists, an allegation Ukrainian President Vodymyr Zelinsky has ridiculed since, as a Jew, he could not possibly be a fascist.

Many of the allegations that somebody is a fascist amount to calling a person a bully or perhaps an autocrat.  But what is fascism?  Scholars have said it is a variety of political belief that is militaristic, nationalistic, committed to strong leader, biased against selected minorities, and tightly connected to business and corporate power.  Once in power, fascists routinely direct the economy, dominate the media, and exercise wide-ranging social control.

In their rise to power or attempted rise to power, fascists construct a rebirth narrative regarding their nation.  In the past, the fascist story goes, the country had achieved greatness, but then the country was exploited and undermined by certain nefarious groups and forces.  Now is the time to strike back and end a decline and decadent malaise.

The abundant hurling of claims that somebody is a fascist is unfortunate.  These accusations tend to obscure the political threat posed by fascism and the troubling mindset it invites.

If we more carefully focused on actual fascism, we could better appreciate its challenge to liberty and equality, two central values of democracy, our purported form of government.  Fascists do not treasure liberty, that is, a freedom from oppressive authority.  Their marginalization and persecution of minorities, meanwhile, is the opposite of equality.

On a deeper level, fascism calls forward feelings and renderings of experience that are anti-humanistic.  These emotions, moods, and memories are of course more subjective than formally articulated values, but they are nevertheless real and culturally patterned.  For a fascist, feelings of anger, resentment, xenophobia, and the hatred of scapegoats reign supreme.  But wouldn’t we prefer to experience life through an appreciation of beauty, a love of other human beings, and a commitment to the flourishing of humankind?

Overall, we’d be better off reflecting on fascism and the dangers it presents than tossing the word “fascist” at people we find disagreeable.