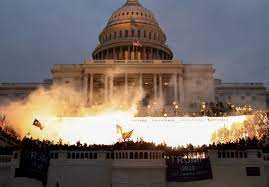 First, “Democrats should not try to go it alone in preserving free and fair elections… Flying solo is a big mistake.” Mistake or no, the votes just aren’t there. There are just not enough Republicans in positions of leadership who will publicly commit to preserving democratic processes when they result in opposite-party victories. Only ten Republicans voted to impeach Donald Trump over his incitement of the attack on Congress, and they have paid the price: almost all have been condemned by their state parties, two are retiring, and the rest are unlikely to survive the 2022 primaries. Seven GOP senators voted to convict, which is marginally better, percentage-wise, but not enough to invoke cloture, especially given that two of them are retiring as well.

Below the congressional level, it is difficult to believe any state Republican officials want to be the next Brad Raffensperger, who likely committed political suicide by rejecting Trump’s call to “find 11,780 votes.” Wis. Assembly Speaker Robin Vos no doubt has Raffensperger’s example on his mind in supporting the ongoing “investigation” into the 2020 election, and in any maneuvering over 2024’s.

One of Hasen’s suggested fixes that Republicans and Democrats might agree on is a revision of the Electoral Count Act, the law that specifies procedures used in Congress to formally determine which presidential candidate won the Electoral College. The law has been criticized as unclear in some important respects. The problem with any such reform is, as I mentioned on Thursday, that laws are not self-executing. No matter how well the law is written, it can’t prevent a majority in Congress from willfully misinterpreting it. It’s like what Willard Van Orman Quine once said about beliefs — “Any statement can be held true come what may, if we make drastic enough adjustments elsewhere in the system.”

Egregious evasion of a statute would have consequences in a normal political environment, but the current environment is anything but normal. Indeed, all of the negative political consequences in the last eighteen months have come from following election laws. Revising laws won’t matter without a change in the base level of support for ignoring them.

Hasen ultimately recognizes this point, which is why he offers his second recommendation: “[B]ecause law alone won’t save American democracy, all sectors of society need to be mobilized in support of free and fair elections.” By “all sectors” Hasen means “all of civil society: business groups, civic and professional organizations, labor unions and religious organizations.” Most of these groups have already come down in favor of one or the other party, so primarily this means business groups. Hasen points to a provision in Texas’s recent voting law that might have been killed due to business opposition.

This pressure is extremely weak, however. There has been a widespread advertising boycott of Tucker Carlson’s show on Fox News, for example, that seems to have had zero impact. Business opposition is also fickle. Most business boycotts simply lead to calls for counter-boycotts and threats of reprisal. There’s unlikely to be sustained business opposition to a goal cherished by 42% of the public, no matter how troubling it is for democracy, and experienced politicians know this.

Hasen’s third recommendation is that “mass, peaceful organizing and protests may be necessary in 2024 and 2025.” But again, such protests of election shenanigans would have to be bipartisan to be effective: “Gerrymandered legislators may not respond to entreaties from Democrats, but they are more likely to respond to widespread public protests made up of people of good faith from across the political spectrum.”

They might be more likely to respond, but that doesn’t mean such protests will happen. Just like there is no evidence of at least Republican political support for democratic processes that result in electoral defeats, and thin evidence of business support, there’s not much evidence of popular support either. There will be no large bipartisan crowds. And it’s unlikely that massive protests would remain entirely peaceful, either, especially once confronted by organized, armed counter-protests goaded by cable and social media.

Other than all that, there is room for optimism.

Welcome to Greg Helding, Our Guest Blogger for July

State v. Stevens: Reaffirming Blum on No Precedential Value of Overruled Court of Appeals Cases – With a Caveat