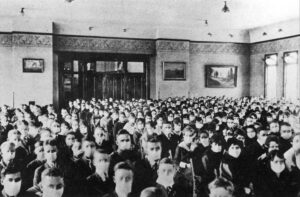 Here we are . . . .  It’s January 22, 2022. It’s windy outside. Cold, yet blindingly bright. What snow we had in Milwaukee County has mostly melted, yet winter isn’t even a month old at this writing. Classes resume for the “spring” semester on Monday, the 24th of January 2022, having been delayed for a week so Marquette University can address the burgeoning Omicron variant of the COVID virus. It is this writer’s second “spring” semester at Marquette University Law School and the second spent in the global COVID pandemic.

Back when acceptance letters were being delivered to the class of law students who will graduate in May 2023, scarcely a person on the planet predicted—or even truly considered—that two years hence, we would still be in the throes of a devastating pandemic. And yes, devastating is the correct word to use here, but it isn’t the only word that can be used. The pandemic, for some aspects of life, has been confusingly constructive and progressive. Despite this, many still ask, “When will things return to normal?”

Personally, this writer struggles to comprehend what is normal in most situations—a flaw, perhaps, that has existed since youth. But let’s put the question to the reader: What is normal? Is normal waking up most days, Monday through Friday, getting ready and heading to work? Is normal groaning about the state of the economy and the state of the government? Is normal wondering why, suddenly, you can’t find any of the sundry items you usually buy at your local grocery store? Is normal going to class, in person, and taking notes from a professor who is droning on and on at the front of the classroom despite the glazed look in the students’ eyes? Perhaps, if you’re like this writer, normal is that state of bemusement one finds oneself in when trying to figure out what normal is.

For most folks, all those questions probably crossed the mind for what normal is, though all those questions are insufficient to adequately convey what is meant by normal. Colloquially, it seems as though, when speaking of normalcy, people simply mean the state of being in which they existed prior to whatever thing changed dramatically in their life. Dramatically because we rarely notice the small changes in life when they first occur, like that toothache that has probably been there for three years but is now causing untold pain. We might think that normal in that situation means going back maybe a year, not knowing we’ve had the cavity for four years.

But is that really normal? Throwing the word normal into the Bing search engine produces the following definition:  “the usual, average, or typical state or condition.” Ok, cool. Normal is just what we usually expect . . . .  Wait, that’s maddeningly unhelpful for someone wondering when things will go back to normal . . . .  So, when do we go back to normal?  The question is easily answered, at least as it relates to law. The answer is:  We’ve been at normal since shortly after the pandemic began.

While some commentators wish you to believe that things are never going to return to normal, such a claim is rather myopic. What those commentators really mean is that things have changed from what they are and this thing happening now is normal. Duh. That’s what normal is. Normal is what you expect, according to the definition. Normal for the pandemic began, for most folk, after they grasped the concept that washing hands and wearing a mask when you’re sick is expected or the usual, typical practice in a society that cares about its population. For us legally-minded folk, normal also began at that time, but our normal was still settling.

We existed in a state of abnormality as long as we attempted to argue with the reality of things. When courts began to hold hearings and trials in virtual spaces (utilizing what has been termed “the metaverse”), much of the legal community balked and wanted to everything to stay as it had. But that isn’t normal. Normal isn’t resisting change. Normal is changing, adapting with your circumstances. Evolving. In the classroom, normal is not meeting physically but is, rather, meeting—if at all—to exchange ideas and have our ideas probed and scrutinized. Sure, part of the expectation was meeting in a classroom, a physical classroom, but that hardly makes having virtual class abnormal.

Not only are virtual classrooms normal, but digital learning has been normal since Millennials were in grade school; most of our generation learned how to type on a computer before middle school. Virtual court is also normal. It is a bit challenging, at first, but that is only true if one expects something that isn’t reality. Practically speaking, not much has changed in the way court is conducted virtually. Attorneys still have filing dates, witnesses are still called, the media still covers high-profile cases. Maybe the virtual component is a little awkward because humans still crave that interpersonal connection, but aside from the awkwardness of staring into a camera rather than someone’s eyes, not much has changed.

What is the point of this post?  What does this writer hope you take away? Honestly, this writer hopes that you leave with an open mind. Understand that the COVID pandemic is not abnormal. It has progressed in a predictable, i.e., typical, fashion; the public’s response to the policies enacted by government to curb the spread have been understandable; and the changes needed are the usual changes. Let’s stop acting like this is all new. It isn’t. We’ve been here before, and we’ll doubtless be here again. In the meantime, accept that life is normal just not the way it used to be. Embrace the changes and dive into whatever it is that makes you tic. Let’s skip the tired conversation of why you aren’t going to get the vaccine for personal reasons.  No one cares. That isn’t to say that your personal convictions are not valid, they are. But if you, the reader, don’t care about the reasons folks around you are getting vaccinated, why should you expect them to care about the reasons you aren’t? That’s abnormal.

Doing away with deference?

The Supreme Court and the Fate of the Ministerial Exception