Learned Hand wasn’t as skeptical of a court’s ability to decide issues of fair use and substantial similarity as he is often portrayed. 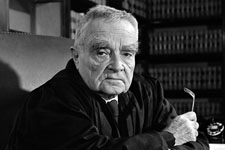 Possibly no judge had a greater influence on copyright law in the twentieth century than Learned Hand. Nichols v. Universal Pictures and Peter Pan Fabrics are foundational cases in most textbooks; Sheldon v. MGM and Fred Fisher v. Dillingham used to be. And although he did not write the opinion, Hand was on the panel that decided Arnstein v. Porter.

Part of the reason for Hand’s enduring popularity is that he was a brilliant writer, and his aphorisms about copyright law continue to appeal to a skeptical age. In Nichols, he famously declared with respect to the distinction between uncopyrightable idea and copyrightable expression, “Nobody has ever been able to fix that boundary, and nobody ever can.” In Shipman v. RKO Pictures: “The test is necessarily vague and nothing more definite can be said about it.” In Dellar v. Samuel Goldwyn, Inc., decided per curiam but attributed to Hand: “[T]he issue of fair use … is the most troublesome in the whole law of copyright.” In Peter Pan Fabrics v. Martin Weiner Corp.: “The test for infringement of a copyright is of necessity vague…. In the case of designs, which are addressed to the aesthetic sensibilities of an observer, the test is, if possible, even more intangible.”

To modern ears, these sound like (and are often quoted as) criticisms of copyright law. A vague, ineffable test is an unworkable test, one that offers no guidance to lower courts or juries and is therefore hardly better than no test at all. But to read Hand in this way to read him anachronistically.

Hand saw the inexpressible nature of the test for infringement as, not a problem, but rather an indication it was a task tailor-made for judicial discretion. This is clear from reading the above quotations in context, none of which despairs at the notion that infringement can be reasonably decided. The opinions rather brim with confidence that such determinations can be reliably made. Take the conclusion of Sheldon v. MGM: “That as it appears to us is exactly what the defendants have done here; the dramatic significance of the scenes we have recited is the same, almost to the letter.” In Nichols, despite his statements about the amorphous idea-expression “boundary,” Hand firmly concluded that what Universal took was “only a part of [Nichols’s] ‘ideas.’” In Hein v. Harris and Fred Fisher v. Dillingham, Hand himself identified the similar passages in the plaintiff’s and defendant’s musical compositions and found infringement. In Peter Pan, the court proceeded “to estimate how far [the fabric’s] overall appearance will determine its aesthetic appeal when the cloth is made into a garment.” In Hand’s view, although the test for infringement could not be expressed in words, judges were fully capable of deciding infringement by a subjective comparison of the two works. Again from Nichols: “We have to decide how much, and while we are as aware as any one that the line, wherever it is drawn, will seem arbitrary, that is no excuse for not drawing it; it is a question such as courts must answer in nearly all cases.”

This view of judging—that the judge can reliably perform a subjective analysis of two works that can’t be put into words for the benefit of others—is not one widely celebrated today. When and why that changed is the subject of Monday’s post. But for now, it is worth noting that Arnstein v. Porter, the basis of the modern test for infringement, is clearly the product of the Hand court. As I mentioned yesterday, Arnstein was the culmination of a series of cases confronting a persistent difficulty in how infringement determinations were to be made. The Arnstein court resolved a split in authority within the Second Circuit between opinions that engaged in a thorough examination of the details of the two works, and opinions that took a more holistic, “ingenuous” approach. The solution, Judge Jerome Frank declared in Arnstein, was to combine the two prior approaches into a new, two-part test for infringement. The first part would engage in the forensic inquiry of whether any actual copying had occurred. The second part would determine infringement. In other words, the second part is where the action is in a case where some influence is admitted. And the test for the second part was extremely vague:

The question, therefore, is whether defendant took from plaintiff’s works so much of what is pleasing to the ears of lay listeners, who comprise the audience for whom such popular music is composed, that defendant wrongfully appropriated something which belongs to the plaintiff.

But how much does it take to “wrongfully appropriate”? The opinion doesn’t say.

It seems odd to modern eyes that Arnstein goes through all the trouble of spelling out a two-part test in great detail, and then has almost nothing to say about the crucial second step except to leave it to the decisionmaker’s unguided determination of what is “wrongful.” It makes more sense, however, if such equitable decisionmaking was viewed as a perfectly normal and expected way for a court to reach a result.

Judge Frank’s assignment of this task to the jury was in line with his commitment to Legal Realism. The Legal Realists are hard to define as a school, but one thing they appeared to agree on is that courts should move away from defining legal categories and toward more open policy-based decisionmaking. Another common Legal Realist move was to give at least some of that policy-making power to the jury. Thus, in negligence law, the Realists moved away from formulaic categorical determinations of the duties owed by defendants to prevent harm and by plaintiffs to avoid harm, and pushed the critical part of the negligence determination toward a more case-specific inquiry into the question of breach: did the defendant take objectively reasonable precautions to prevent harm to others? And that was declared to be quintessentially a jury question: the jury was in the best position to determine as a policy matter community standards of care in  light of ordinary risks.

Frank’s assigning of the improper appropriation issue — later designated as “substantial similarity” — to the jury was consistent with this philosophy. The key policy question in a case involving popular music is, how much is too much? How much similarity, if it results from actual copying, will kill demand for the original? Frank saw that as a policy question best left to the standards of the relevant consuming community, lay jurors, who could make such a determination without further guidance from the court, just as they did with reasonable care.

The big question is why Learned Hand signed onto this. Indeed, according to internal correspondence between Frank and dissenting judge Charles Clark, the framework of the Arnstein decision was Hand’s idea. (For more on the internal deliberations, see Shyamkrishna Balganesh’s excellent article, The Questionable Origins of the Copyright Infringement Analysis.) But there’s no indication that I can find that Hand had the same faith Frank did in the jury’s ability to make subtle distinctions between idea and expression, and to then determine the extent of similarities in expression alone. Hand’s calls in other opinions to engage in the detailed subjective analysis of works were aimed at judges.

So why did Hand join Frank’s opinion? We can only speculate. One possibility is that Hand was persuaded by Frank’s description of popular music as a field in “which a jury is peculiarly fitted to determine” infringement; that is, that juries were appropriate triers of fact in music cases but not others. That seems unlikely, however, for a couple of reasons: first, it was not in the court’s power to determine whether the case would be tried before a jury or not; and second, Hand had demonstrated previously that he thought at least one judge — himself — was fully capable of determining improper appropriation in popular music cases, in Hein v. Harris and Fred Fisher v. Dillingham.

Another, more likely possibility is that Hand saw the main issue in Arnstein as the bifurcation of the proof of infringement, and was willing to overlook Frank’s preference for assigning tasks to the jury to get a clear and detailed explanation of the two facets of a court’s infringement analysis. This theory has the additional benefit of explaining why, if true, Hand decided originally to write the opinion himself and only later asked Frank to do it. Arnstein’s division of the infringement inquiry into two parts, copying and wrongfulness, resolved a problem that Hand had become increasingly concerned about in the last fifteen years. District court judges had begun jumping straight to an inquiry into whether the defendant’s work was too similar to plaintiff’s, without stopping first to consider whether the defendant had actually copied from the plaintiff. Conversely, some courts held long hearings and accepted voluminous evidence on the question of whether the plaintiff’s plot points had been done before, in earlier works, regardless of whether they plaintiff had actually seen and copied from them, in order to determine whether they were “original” or not. Both of these procedures threatened to impede the creation of new works that bore some resemblance to prior works, by making them unprotectab1e and potentially infringing. The Arnstein framework channeled district courts’ inquiries into first determining whether actual copying had occurred, and only then turning to the question of whether too much expression was taken. Hand had twice proposed that lower courts follow this structure, in his Sheldon opinion and in the Dellar per curiam opinion, but in neither case spelled out the distinction at the length Frank did in Arnstein, and in both cases may have confused matters by referring to the improper appropriation inquiry as “fair use.”

By contrast, the issue of whether improper appropriation was a matter of law for the court to decide, or a matter of fact for the jury, might have seemed comparatively minor. The Federal Rules of Civil Procedure were still relatively new, and courts were still trying to determine its impact. It would have made sense, in an infringement case being tried before a jury, to give that jury decisionmaking power over the key elements of the plaintiff’s proof, which in a copyright infringement case includes not only whether copying occurred but whether it was wrongful. But those would have been a small number of cases. Arnstein was a rare infringement case that did not request an injunction, probably because Arnstein litigated his case pro se. Until 1938, cases brought in equity would not have been tried before a jury, and until 1958, courts routinely heard even mixed cases asserting both equitable and legal claims without a jury. Even afterward, until near the end of the twentieth century, lawyers for both parties in copyright infringement cases typically did not request a jury trial. Judge Frank’s conclusion in Arnstein that the jury should determine improper appropriation therefore applied to a vanishingly small number of infringement cases.

Arnstein obviously gives very little guidance to juries attempting to determine what might make appropriation “wrongful.” But it gave very little guidance to judges as well, leaving it to their equitable discretion. That seemed fine for about fifteen years, until a new generation of judges took the federal bench, one with starkly different ideas than the judges of Learned Hand’s era about the relationship between courts and law. Their encounter with copyright law has wrought a significant, but perhaps unappreciated, change in that law, that will be the subject of Monday’s post.