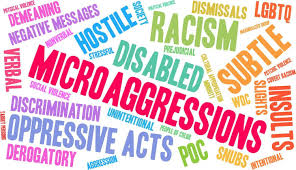 Last year, I watched as a law student was introduced to a lawyer volunteering at the legal clinic. The lawyer was a white man in his 60s. The student was a woman of color in her 20s, and she was wearing hijab. I happen to know that both people have hearts of gold and come to the legal clinic with a desire to help and to give their time and talents selflessly.

Nonetheless, upon being introduced, the lawyer’s first words to the law student were: “It’s nice to meet you. Are you a foreign exchange student?” The student looked confused and embarrassed as she replied, “No. I grew up here in Milwaukee.”

A similar incident happened recently when a white lawyer asked a student of color where he was born and whether he had voting privileges. Again, the student in question replied that he was born and raised in the United States.

Yet another time, a white lawyer sat down at a table with a student of color: “What can we help you with at the clinic today?” The underlying assumption was that the student must be a client.

I also remember a moment when a white lawyer worked with a Latinx student for an entire shift and remarked at the end, “You are so articulate.” Why would this be mentionable? This is a student who has a college degree, has been admitted to law school, and will have a law degree in a few years.

The same comments would not have been made to white students volunteering in the clinic. In all instances, the lawyers did not intend to hurt or embarrass the students of color. But the comments all send a clear signal that the students are outsiders, foreign, not one of us, or a credit (and therefore a surprise) to their community. These are examples of microaggressions. Oxford defines “microaggression” as indirect, subtle, or unintentional discrimination against members of a marginalized group. Microaggressions happen casually, frequently, often without any harm intended, in everyday life.

But while no harm may be intended, harm occurs anyway. The impact the comments have is where we want to focus our energy—not on the lawyer’s intention. The lawyer in these examples most likely did not intend to do any harm. But in each instance, harm was done. Those on the receiving end of such microaggressions should not be responsible for responding. That’s my job and the job of other white, privileged allies.

We all make mistakes. Indeed, I made mistakes in each of the four instances described above because I witnessed the comments and failed to intervene. I did not want to embarrass or offend the lawyer. I did not want to further embarrass the students by calling more attention to the moment. And I did not know what to say.

But upon reflection, I should have acknowledged the incident with each student. I should have said, “Earlier, the lawyer’s comment to you sounded hurtful.” Or, “That lawyer’s question was ignorant. You belong here.” To one lawyer, I could have said: “’Foreign exchange student’? People all over the globe—even right here in Milwaukee—wear hijab.” I could have had a private conversation to enlighten the other lawyer by stating, “Unfortunately, you are not the only person to have mistaken a student of color for a client. It is painful for students when this happens.” I could have said after hearing the other comment, “We only admit articulate students to law school.” But I didn’t. I regret my inaction in all of these instances.

Our students of color should not be tasked with having to explain themselves or defend themselves or their qualifications. The burden must be on those of us with privilege to be more mindful of our words and actions and to be willing to call out others with privilege for their words and actions. We cannot reduce unconscious bias by remaining silent.

And when someone is brave enough to point out that a comment or behavior is a microaggression, please resist the temptation to hear this as an accusation that we are bad people. Move past defensiveness; focus on empathy and learning. This is really where we find the greatest opportunities.

Please keep thinking about this issue and how you fit into a solution. Read about it, talk about it with friends and family, ask questions, and be prepared to make mistakes and make apologies. A short reading list follows:

James Baldwin: On Being White… And Other Lies

The Racism of Good White People

Proud to be White

Luke Wood & Frank Harris III: How to Respond to Racial Microaggressions When They Occur

One thought on ““Are You a Foreign Exchange Student?” and Other Microaggressions in the Legal Clinic”