Team members Travis Goeden and Ruth Nord-Pekar advanced to the semifinal round before being eliminated after losing by less than three-tenths of a point. Professor Melissa Love Koenig advised the team, which was coached by attorneys Kieran O’Day (L’20) and Evan Thomson. 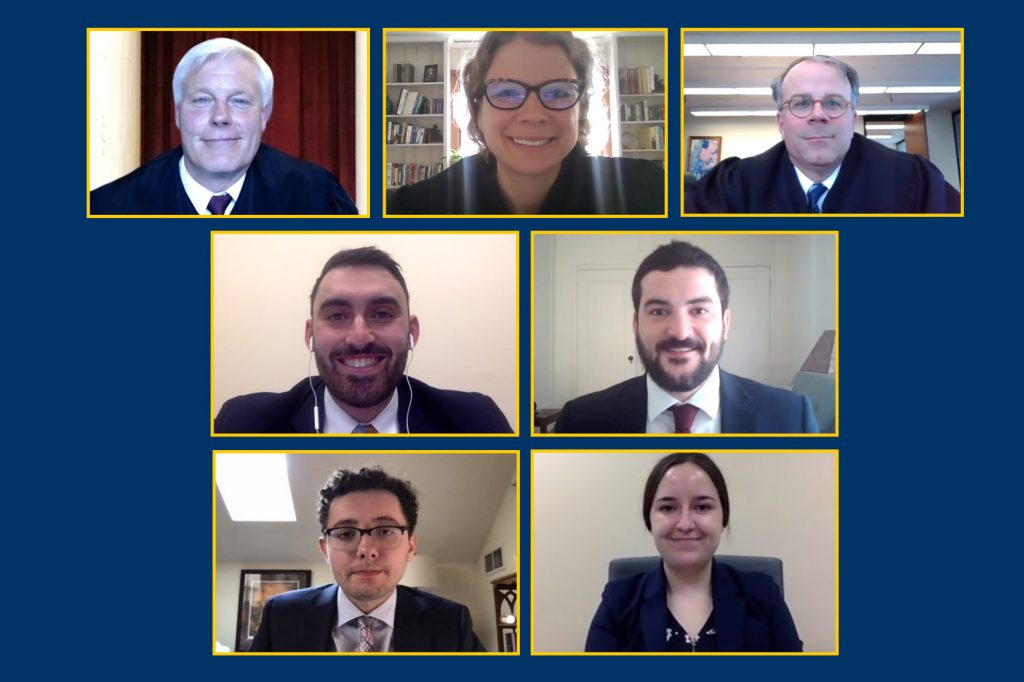 Presiding over the final round were Hon. Paul Thissen (Minnesota Supreme Court), Hon. Michael Y. Scudder (United States Court of Appeals for the Seventh Circuit), and Hon. Cynthia M. Davis (L’06) (Milwaukee County Circuit Court). This year’s final round was held virtually on Zoom but livestreamed over YouTube. More than 70 people watched the final round on YouTube.

Students are selected to participate in the competition based on their success in the fall Appellate Writing and Advocacy class at the Law School.

Here is a link to a recording of the final round.

The last two weekends have been busy ones for the students competing in the Jenkins Honors Moot Court Competition. Each team argued four times the weekend of March 20-21 in the preliminary rounds to determine which teams would advance to the quarterfinal round.

On Saturday, March 27, the eight teams that advanced argued to see which would advance to the semifinals.

After some very close rounds, four teams moved on to the semifinals. Those four teams were:

These four teams competed on Sunday, March 28. The two teams that emerged as finalists are:

Congratulations to the finalists, and thank you to the many alumni and area attorneys who helped with the competition by grading briefs or judging oral arguments. Thanks, too, to the law school’s tech department and to Steve Nelson who kept this weekend’s virtual competition glitch-free.

The final round of the competition will be held virtually on Tuesday, April 6, at 3:30 PM, and will be lived streamed on YouTube.

The final round will be judged by The Honorable Michael Y. Scudder (U.S. Court of Appeals for the Seventh Circuit), The Honorable Paul Thissen (Minnesota Supreme Court), and The Honorable Cynthia M. Davis (L’06) (Milwaukee County Circuit Court).

The Jenkins Completion is named in honor of the late James G. Jenkins, the first Wisconsin judge of the United States Court of Appeals for the Seventh Circuit (1893-1905) and the first dean of Marquette Law School (1908-1915).

The event is free and open to the public, but registration is required to receive the link. You can register here.

She met her husband Seymour in Indiana; they moved to Madison in the early 1960s, where Abrahamson earned her S.J.D. from UW Law in 1962. Thereafter, she became the first female lawyer at the Madison law firm La Follette, Sinykin, Doyle & Anderson. She was named a partner within a year. All throughout the time she was in practice, she also taught at UW Law.

In 1976, then-Governor Patrick Lucey appointed her to the Wisconsin Supreme Court’ she was the first woman to serve there. END_OF_DOCUMENT_TOKEN_TO_BE_REPLACED

I intended to write this post in March, upon returning from Spring Break, but 2020 got in the way. Better late than never, as they say; and I would be remiss not to recognize the excellent work of our 2019-20 Environmental Law Moot Court team, consisting of Caleb Tomaszewski and Adam Vanderheyden. The team (pictured here along with coach Dennis Grzezinski) competed in the 2020 National Environmental Law Moot Court Competition hosted by Pace University in White Plains, New York. Caleb and Adam advanced out of the preliminary rounds to the quarterfinals, where they were narrowly defeated. The team received high praise from several judges, but Caleb reported that the most gratifying aspect was “hearing the judges say that we are ready to advocate in real life.” I appreciate the significant contributions of Dennis Grzezinski, Gabe Johnson-Karp, and Professor Alex Lemann, who coached the team with me. But most of all, bravo to Caleb and Adam on achieving the best placement in years for the Law School in the National Environmental Law Moot Court Competition.

In Marquette Law’s first appearance at the Billings, Exum & Frye National Moot Court Competition at Elon University School of Law in Greensboro, North Carolina, three Marquette Law students showed that Team Marquette is a force to be reckoned with.

Luis Gutierrez, Terreea Shropshire, and Nicholas Wanic were one of 40 teams at the competition. Though their brief was not one of the top two in the competition (the only ones awarded honors), they earned a high score that was nearly ten points above the median. Further, they won each of their three preliminaries rounds and advanced to the octofinals.

This competition had a tight turn-around time between problem release, brief deadline, and competition. All three team members stepped up and showed how hard work pays off. Professor Rebecca Blemberg served as the team’s faculty advisor and coach. Other coaches were Attorney Courtney Roelandts (L’18), who also accompanied the team to the competition, and Attorneys Jessica Delgado (L’19) and Sarita (Sadie) Olson (L’19), with Professor Lisa A. Mazzie assisting. Thank you, too, to Attorney Greg Helding (L’14), who served as guest judge.

Congratulations, team, on your accomplishments!