On the Issues: Ellen Gilligan, President and CEO of the Greater Milwaukee Foundation 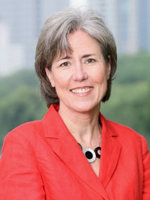 Having just completed her first year on the job, Gilligan heads an organization that ranks among the top 30 community foundations in the nation. With assets of $590 million, the GMF is focused on addressing Milwaukee’s most critical needs and issues, such as education, workforce development, and race relations. Gilligan has spent nearly 30 years in the non-profit sector. She came to Milwaukee from Cincinnati, where she was vice-president of community investment at the Greater Cincinnati Foundation. Gilligan’s father was a former congressman and governor of Ohio; her sister is Kathleen Sebelius, former Kansas governor and secretary of health and human services in the Obama administration. Marquette Law School, Eckstein Hall, 12:15 p.m.