On the Issues: Scott Fitzgerald and Jennifer Shilling 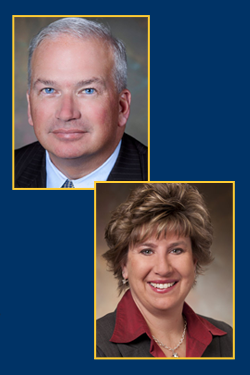 Senate Majority Leader Scott Fitzgerald (R) and Senate Minority Leader Jennifer Shilling (D) — Get the inside story on the state budget deliberations, as two of Wisconsin's most influential lawmakers visit Eckstein Hall for a conversation about the state's spending and policy priorities. From funding for K-12 education and the University of Wisconsin system to plans for a new downtown arena, Fitzgerald and Shilling will offer insight into what a final two-year spending plan might look like, and what it could mean for residents of the state. Fitzgerald, a Republican from Dodge County, was first elected to the Wisconsin State Senate in 1994, and has served as Majority Leader since 2011. Shilling, a Democrat from La Crosse County, is a former state representative who was elected to the Senate in a special election in 2011. She is in her first year as Democratic Minority Leader.