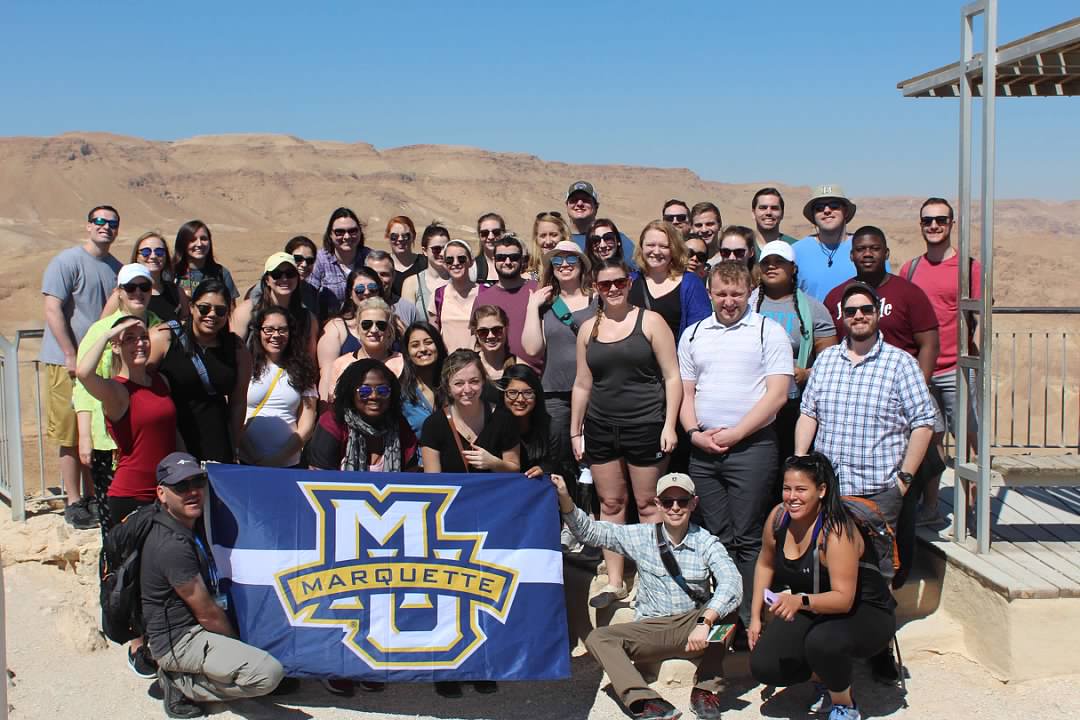 The courses in International Conflict Resolution and Comparative Dispute Resolution provide students with an in-depth understanding of conflict resolution in the international arena.  Students are required to research and present on the different organizations highlighted during the semester.  Classroom discussions focus on initiatives in dispute resolution undertaken by certain countries or institutions, and the courses includes a trip to tour the highlighted country to meet with international organizations, legal professionals, grassroots organizations and others working on conflict resolution.

Students are asked to write blog postings about the trips which are published on Indisputably.org.  Some past reflections highlight the transformative power of these courses:

We were greeted for our first morning in Belfast by both our tour guide and some traditional Irish weather. Our quite rainy walking tour took us through many locations deeply connected to the time of the Troubles. It was during this walking tour we were quickly confronted with the very real and lasting impact of the Troubles – the peace walls.

The Peace Walls were built between the Catholic and Protestant communities in Belfast as a temporary effort to minimize the conflict beginning with The Troubles in 1969. Rae-Anna Sollestre noted that “as we drove around Belfast, the stark contrast between the Peace Walls and the surrounding communities left an impression on me. The walls started out short and grew with time. The walls separated the two communities, closed off the streets connecting them. They were and still are a physical manifestation of the conflict that remains quite high in some places. Multiple generations have grown up with these high walls dividing communities, and it’s normal for them.”

Sollestre made a connection to the walls personally, writing “when thinking about my childhood and my own life, the freedom to move from one neighborhood to the other, the ability to cross in and out of different neighborhoods was something I took for granted. To be physically separated from another community is something that I could not fathom, and yet these communities experience it every day. School children have painted murals in efforts to make the wall more aesthetically pleasing, friendlier, and yet the the immensity of the walls maintains and emphasizes the division between the Catholic and Protestant communities. It would seem that for the community to move forward much more work needs to be done before the walls could come down and both communities to move forward in the aftermath of The Troubles including acknowledgment of wrongs done by both sides.”

Having known little about the conflict in East Jerusalem, it was eye opening for me to listen to Ms. Barakat discuss the realities of life in East Jerusalem. It was great to hear from someone so invested in the community because it allowed us a realistic understanding of what was going on, which is important when you are trying to understand why there is so much conflict. It is easy to be on the outside looking in and develop an opinion on the conflict going on, but until you truly get an understanding of life and the people there, you realize you really don’t know what you are talking about. Her views on embracing both sides of the community and coming together to find peace could not have been a better tone to set as we crossed the Green Line, into Palestine… Our trip to the West Bank was one I will never forget. To have the opportunity to see, first hand, the realities that plague Palestinians, really puts one’s understanding of the conflict in a different perspective….I came back from the trip, and every person I talked to, I wanted to set the record straight on what Palestine is like, and how important it is to support peace, but not to get so engrossed in thinking we can fix it for them. The discussion should be between Israel and Palestine. The United States can and should help facilitate that relationship, but we need to understand our place. . . .This was truly a once in a lifetime experience, and I am beyond grateful to have had [it].

Spending a week in Havana was an eye-opening experience for many reasons. I expected good food, friendly people and time capsule-like architecture, and was not disappointed with any of those. However, I was most intrigued with how the country and the Castro government was handling the introduction of market reforms and resuming diplomatic relations with the United States. Most fascinating was the talk with the economist from the University of Havana. I went into the trip expecting a heavy dose of Marxist-Leninist thought to permeate every discussion the group had, and although this was generally true, the economic lecture ended up being one of the fairest and provided the most realistic outlook for the Cuban economy and future enterprise prospects for the public.  What I found most interesting about the lecture was the fact that by 2030, 30% of the Cuban population was expected to be over the age of 65 and at retirement age. Additionally, I was unaware that the country had been exporting significantly less sugar than in previous years, and fully expected tourism to become their main industry going forward. The economist was rather candid with his observations that this combination of factors would likely result in some serious future difficulties for the Cuban economy.